After more than two years of remote work, many employees have no interest in returning to the office — at least not without good reason. Employers have responded in kind, more or less, with tech companies in particular offering generous work from home and hybrid work options. Not all businesses are behind the changes, but there’s no denying that the pandemic rewrote the rules around the workplace — quite possibly for good.

Shifts to a mostly remote workforce don’t happen overnight, however. According to ActivTrak, 41% of organizations didn’t have a dedicated remote work policy in place as of May 2020. And when the shifts do happen, they’re not always graceful. One survey suggests that nearly half of employees — 46% — find remote work, at least in the early stages, can make it more difficult to maintain professional relationships with key stakeholders.

Brett Martin, the co-founder and president of Kumospace, believes a core piece to easing the transition is workplace collaboration tools — especially video chat tools that foster a “virtual office” feeling. He’s biased, of course — Kumospace sells a video chat platform. But Martin says the proof is in the pudding: thousands of hybrid and remote teams use Kumospace today, some for more than five hours per day.

Those metrics certainly won over investors. Today, Kumospace closed a $21 million Series A round led by Lightspeed with participation from Boldstart Ventures and others. It comes a year after Kumospace raised $3 million in a seed round spearheaded by Boldstart, and as the platform makes the transition from a private to public beta.

“[Kumospace CEO Yang Mou] and I have been friends for a long time. We’ve built three businesses together, all focused on using technology to connect people — Sonar, Switch, and Kumospace. Kumospace is the culmination of our life’s work,” Martin told TechCrunch via email. Martin is also the co-founder of venture firm Charge Ventures and an adjunct professor at Columbia University, while Mou was a Google engineer prior to coming on to Kumospace. “When COVID-19 hit, we scrambled like everyone else to go virtual. In doing so, we realized that somehow in April 2020, there was still no good solution for group video chat. Two weeks later, Yang had already built the proof of concept and we were off to the races.”

One might counter that, in fact, there were “good solutions” for group video chat in April 2020, like Zoom, Google Hangouts (now Google Meet) and Microsoft Teams. But Martin argues that their limitations became “painfully apparent” as the pandemic wore on. For example, while platforms like Zoom excel at scheduled conference calls, they’re a poor fit for quick, spur-of-the-moment check-ins because they’re cumbersome and unintuitive, Martin says.

“Clear and constant communication is the key to running any company, whether the company is in-person, hybrid, or remote,” Martin said. “We need to stop pretending that chat emojis equal corporate culture and a sense of community. [And ] we need to acknowledge that one virtual teambuilding event a month is no substitute for daily unstructured interactions with your coworkers.” 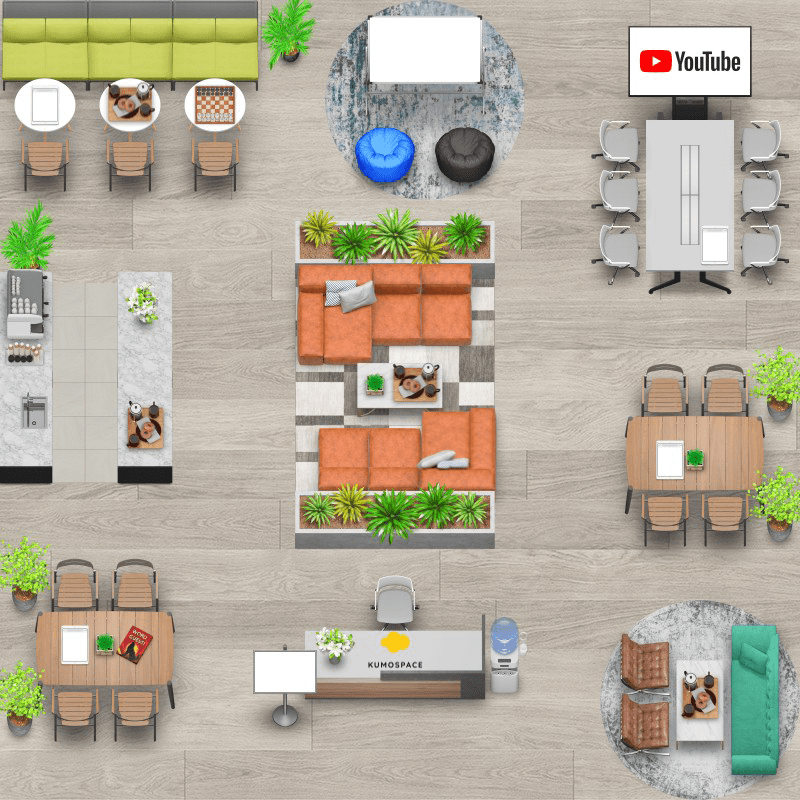 To that end, Kumospace is designed to reduce onboarding friction — users can sign in as guests without providing an email if they choose. Once they select an avatar — their selfie — they’re plopped into a stylized, video game-like simulacrum of a physical office complete with chairs, coffee tables, water coolers and conference rooms. Spatial audio gives the illusion of co-workers coming within and out of earshot, while broadcasting allows higher-ups to message individual teams or the entire workforce with announcements.

Kumospace users can move around the virtual space to join private rooms with features like status messages and simultaneous screen sharing. Their avatars’ location — e.g. in a conference room — is meant to indicate whether they’re indisposed, available for a chat and so on.

“The physical structure of an office and the biological necessities of humans create relationships between folks that don’t already work together — i.e., the water cooler,” Martin said. “In a remote environment, everyone [is] working in silos, [so] communications get lost and managers quickly become bottlenecks … Kumospace’s virtual offices help remote and hybrid teams build ‘dense’ social networks to improve company wide communication and bonding.”

The platform even offers analogs for team-building activities, like games, music and drinks (at a virtual bar), though Martin stresses that Kumospace is focused on “professional” use cases.

There’s bound to be skepticism among old-school management of a workplace platform with low-fi graphics and game-like mechanics. In an interview with The New York Times, Mou himself said that he was particularly influenced by massively multiplayer online role-playing games like World of Warcraft while creating Kumospace. Aesthetics aside, Kumospace and its rivals — Gather, Pluto, Hopin, Preciate Social, Teamflow, Branch and Run the World — raise serious privacy questions. With ambient, “always-on” collaboration software, it’s theoretically easier to track employees’ activity.

In response to the second point, Martin notes that employees can delete any data they’ve opted to share with Kumospace. To the first, he says he believes the advantages of “virtual offices” over plain videoconferences — more frequent impromptu conversations, freer exchanges of ideas, etc. — will become clear over time. Already, Kumospace has attracted big-name customers like Google, NASA, Brown University, Deloitte, Wikipedia and several unnamed government institutions, he claims.

Martin also posits that the broader economic slowdown will be good for remote work and, by extension, lower-cost solutions like Kumospace. As opposed to unwieldy and pricey remote setups in virtual reality — although it’s not clear demand is strong for those at present, to be fair — Kumospace is plug-and-play and priced at $150 per month for companies with more than 30 concurrent participants.

Supporting evidence is mixed. Hopin was forced to lay off hundreds of staff members earlier this year as the demand for virtual events dwindled. On the other hand, a growing number of companies are exploring virtual offices as a cost-saving — and ostensibly productivity-boosting — measure. Legendary VC firm Andreessen Horowitz recently announced that it would ditch its physical HQ in return for smaller global outposts and an online component. 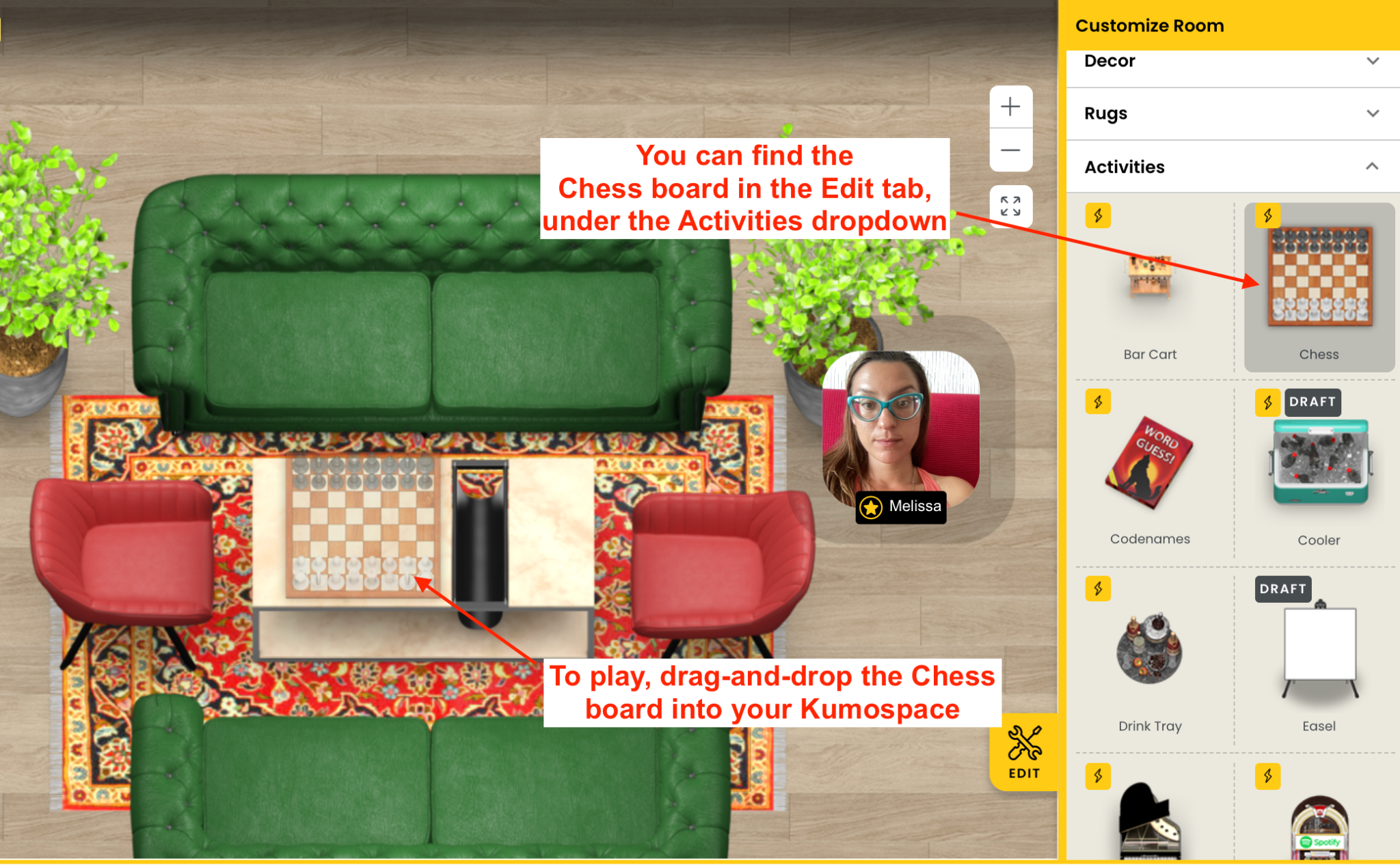 “The pandemic brought Kumospace into existence, and accelerated the paradigm shift that is remote work … Spending millions to rent a pile of bricks that your employees don’t want to go to is a terrible use of funds,” Martin said. “The next big thing often starts out looking like a toy, but over time it changes the parameters of competition. We believe this is how virtual offices will play out. Initially people may dismiss them as silly, but as early adopters showcase the cost savings, eco-benefits, and flexibility, for employees’ lives and employers hiring, the allure of going virtual will become undeniable. In a few years, people will look back at office lunches and nap pods and wonder, ‘What we were thinking?’”

The Series A brings 20-employee Kumospace’s total raised capital to $24 million. Martin says it’ll primarily be put toward product development on the mobile and desktop side and growing Kumospace’s partner and customer base.

“Our Series A positions Kumospace to weather any economic uncertainty ahead. We’re excited to be on the attack when everyone else is in retreat; we see a huge opportunity to use people analytics to help remote teams stay connected,” Martin said. “Every day we add new integrations with other remote work tools, so that teams can get everything they need done — without ever leaving Kumospace. You could say that we are building a business-to-business metaverse.”